He became the first to officially circumnavigate the globe in a gyrocopter in 2019. In 2023, he will sail the world with young ex-offenders in a bid to give them a second chance

James Ketchell has been mistaken for James Bond. And just like the famous spy, Ketchell’s tagline is ‘never say never’.

Caught in the midst of a thunderstorm over Canada in the course of circumnavigating the globe in a machine similar to Little Nellie from You Only Live Twice, he landed on a roadstrip and swung the gyrocopter into a truck bay. “The burly truckers, usually impassive, were taken aback,” says Ketchell, his voice ringing with laughter over the phone from Basingstoke, Hampshire, UK, where he was raised.

Ketchell is the country’s Scouting ambassador and flew the Magni M16C gyrocopter — which resembles a motorbike in the sky with the cockpit exposed to the weather — over 24,000 nautical miles.

The 39-year-old set off from Popham air field, UK, in March 2019 to fly over ice caps, through blinding rain, past world monuments and forgotten outposts of empires, with the wind thrumming through the rotors like a Gregorian chant. Six months later, he returned to base, achieving a feat that was probably the last great aviation record, one that topped his life in adventure with a place in the Guinness World Record.

The Diomede Islands in the Bering Straits are separated by the International Date Line. The picture was shot from the Russian side from the gyrocopter piloted by James Ketchell

Between working on his second book It’s All Mental and trying to keep the spirit of discovery alive in a pandemic world, Ketchell has his sights set on 2023 when he plans to take a group of young ex-offenders (18-20-year-olds convicted or cautioned for a criminal offence) on a sailing expedition around the world.

“The goal is to give them a second chance in life,” says Ketchell. “I was lucky to have good people around me; I want to encourage the use of mentors in one’s life. You are who you spend your time with and some people’s circumstances are harder than others, so I want to give the opportunity to people who are not hardened criminals and put them on the right course.”

Ketchell’s life has been one of second chances — he admits that he was always fit but lacked confidence and determination. “I have always liked travelling — the adventures of Tintin were a favourite — and that passion grew as I got older. I would often build camps in the woods and joined the Scouts which helped bring out my passion for the outdoors. My parents were very supportive which I will always be grateful for. In my late teens I discovered the gym. This helped me overcome confidence issues and eventually move into a sales role at an IT company, before I became a full-time speaker and adventurer.”

The turning point came when Ketchell shattered his ankle in a bike accident in 2007. Doctors said he may never walk properly again but over the next few years, Ketchell surprised them and the world by being the only person on the planet to row, climb and cycle to complete the ‘ultimate marathon’. “It was a wake-up call. The accident was the best thing that happened to me as it made me try harder and pursue dreams that I’m not sure I would have otherwise embarked on.” In 2010, Ketchell became part of a remarkable canon of stories of heroism at sea when he rowed solo across the Atlantic from La Gomera in the Canary Islands to Antigua in the Caribbean.

Every day he would sign off his blog as Capt Ketch, which is how the name stuck. “I had a radar alarm system on the boat that would notify me when anything got close. The challenges I faced were mental, I had to keep reminding myself that it was my dream to be doing this. I would often get blown backwards a lot; it taught me patience and, most importantly, discipline of keeping to my daily schedule. Physically I was often tired but I was surprised at how far I could push myself and keep doing it day after day. It also wasn’t as hard as I thought it was going to be; this is the case with most things, they are never as hard or as bad as you think they are going to be,” says Ketchell, who, drifting under the stars, felt he was guided by the spirit of his grandfathers.

The next year, he summitted Mount Everest and in 2013, cycled eastwards for six months across Europe to Turkey, flew to India and visited many cities speaking in schools to inspire youth, journeyed on to Sri Lanka, Thailand, Singapore, Australia, America and back to the UK where he completed his 18,000 miles on the saddle. But Ketchell was still looking for new worlds to conquer and had his gyroplane built by Magni Gyro in Milan, Italy. Once more he packed his bags with the five essentials he carries: wet wipes; a clean shirt to wear — “you never know who you might meet” — a phone that allows for connectivity, social media updates and audio books; a satellite phone for safety; and a medallion of Saint Christopher (the Christian patron saint of travellers) that has been with him since he crossed the Atlantic.

Sometimes being tossed around in a storm and at others gliding through the air like a hawk, he had his share of incredible sights as he travelled across the northern hemisphere almost hugging the temperate zone. “The average height was usually only a thousand feet above the ground, the highest I flew was 12,000 feet in Utah, US, over mountains. Flying lower is a lot more interesting as you can see things in more detail, if I was flying at 10,000 feet above the ground it’s not much different than looking at Google Earth,” says Ketchell.

He stopped for refuelling every day, and always had a destination that he was flying to each day. “I had a fantastic support team back in the UK but had to often take pictures using a selfie stick, carefully holding it,” says Ketchell. The stunning picture of him flying by the Statue of Liberty was taken by a pilot also flying across Ellis Island.

Most of Ketchell’s adventures have been fundraisers for charity across the UK and the world. “I support the UK-based Kindled Spirit, an anti human trafficking charity that works with an organisation called Kshamata in Mumbai to rehabilitate young girls who have been victims of trafficking gangs. I am passionate about raising awareness around this global crisis.” It is not as if Ketchell has conquered every mountain he set out to climb. He has been rescued from the Indian Ocean and failed to complete his solo rowing expedition around Britain. But he believes that “we can achieve much more than we think”— a mantra he tells children wherever he goes.

The man who has weathered avalanches, sunburn, storms and illnesses says, “Despite Covid, adventure travel will come back bigger; there will always be an appetite for adventure no matter what is going on in the world.”

This Madurai couple promotes the art of drawing kolams 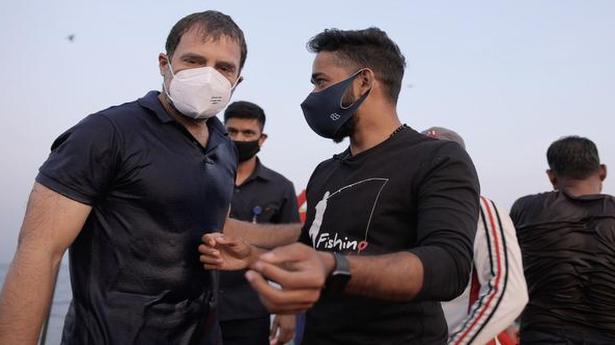